A link between smoking and back pain 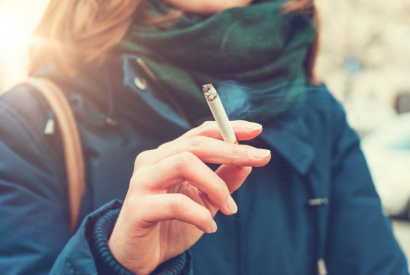 For years, research has shown a link between smoking and an increased risk for low back pain. A new study, published in the December 2012 Journal of Bone and Joint Surgery (JBJS), also found that smokers suffering from spinal disorders and related back pain, reported greater discomfort than spinal disorder patients who stopped smoking during an 8-month treatment period.

As smoking has been identified as a modifiable risk factor for chronic pain disorders, researchers reviewed the smoking history and monitored the reported pain of more than 5,300 patients with axial (back) or radicular (leg) pain from a spinal disorder, treated surgically or non-surgically, over an eight-month period. At the time of entry into care, patients who had never smoked and prior smokers reported significantly less back pain than current smokers and those who had quit smoking during the study period. Those who quit smoking during the course of care reported greater improvement in reported back pain than those who continued to smoke. The group that continued smoking during treatment had no clinically significant improvement in reported pain

For researchers, these results confirm that nicotine increases the pain. They declare : “In this study, if you quit smoking during treatment, you got better. If you continued to smoke, there was statistically no improvement, regardless of the treatment you had. Quitting smoking greatly improves the quality of treatment. Smoking cessation programs should be given to patients who suffer from back or spine".