Another reason to eat chocolate 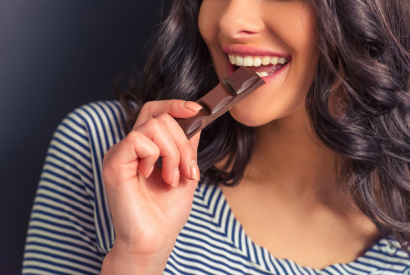 In recent years, large-scale epidemiological studies have found that people whose diets include dark chocolate have a lower risk of heart disease than those whose diets do not. Other research has shown that chocolate includes flavonols, a class of flavonoids, that can reduce the risk of cardiovascular disease. But it hasn’t been clear how these flavonols could be affecting the human body, especially the heart. New findings from Virginia Tech and Louisiana State University, however, suggest that chocolate improves health largely by being indigestible.

Researchers at Louisiana State (1) got through this conclusion after simulating the human digestive system in glass vessels. One represented the stomach and the small intestine, with their digestive enzymes, and a second reproduced a large-intestine-like environment, with gut microbes from human volunteers. The scientists then added cocoa powder to the stomach vessel. The “stomach” and “small intestine” broke down and absorbed some of the cocoa. But while many of the flavonols previously identified in chocolate were digested in this way, there was still plenty of undigested cocoa matter. Gut bacteria in the simulated colon then broke that down further into metabolites, small enough to be absorbed into the bloodstream and participate in reducing cardiovascular inflammation.
Finally, the last undigested cocoa matter, now mostly fiber, began to ferment, releasing substances that improve cholesterol levels. Even more interesting it appears that intestinal bacteria that have digested the cocoa were probiotics like Lactobacillus. Their numbers appeared to increase after the introduction of the cocoa in the digestive system, while less-salutary microbes like staphylococcus declined in number.

These findings are broadly consistent with those from Virginia Tech, published in March in The Journal of Agricultural and Food Chemistry (2). Researchers there began by feeding healthy lab mice a high-fat diet. Some of the mice were also given unsweetened cocoa extract; others were fed with various types of flavonols extracted from the cocoa. After 12 weeks, most of the mice had grown fat and unwell, characterized by insulin resistance, high blood sugar and incipient diabetes. A few, however, had not gained weight. These animals had ingested one of the flavonol groups whose chemical structure seems to be too large to be absorbed by the small intestine.

According Andrew Neilson, an assistant professor at Virginia Tech and the senior author of the mouse study, “future experiments, will decrypt why one flavonol group impeded weight gain and the others did not. “However, Dr. Neilson also points out that cocoa is not a chocolate bar, something whose added ingredients and processing reduce the number and type of flavonols, increase calories (cocoa itself has very few) and possibly change the response of gut bacteria to the cocoa. “The evidence does not show that you can eat a chocolate bar every day and expect to improve your health,” he says.!