Are you overdoing it with the salt ? 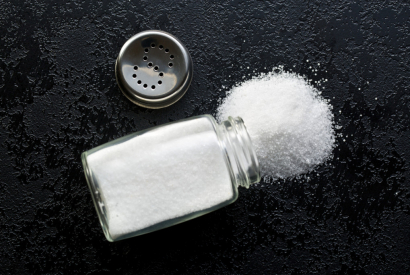 Salt is an important seasoning in anyone’s kitchen. You’d be hard-pressed to find a recipe in any cookbook that does not direct you to “season with salt and pepper” so your meal is not bland or lacking in flavor. And people do need a small amount of sodium in their diet to remain healthy. However, many Americans are consuming more sodium than they need. According to the USDA, healthy adults should consume up to 2,300 mg of salt per day; individuals with high blood pressure should limit sodium intake to 1,500 mg per day or less. People with other serious diseases and conditions need even less. So how do you know if you are consuming too much sodium in your daily diet? Here are some telltale signs you’re overdoing it with the salt.

Processed food is a number one culprit in over-consumption of salt. Andy De Santis, RD, declares, “From a dietary perspective, there are some usual suspects which are particularly high in salt (sodium). If you are a very regular consumer of these foods, there is a reasonable chance your sodium limit is above recommended levels. These foods include: canned goods like soups and stocks, frozen/pre-packaged meals, pickles, olives and other foods sold in preserved jars, sauces like soy sauce and ketchup, processed cheeses, and foods with added salt like nuts, crackers and chips.” This is especially true if you’re inactive.
According to Elizabeth Shaw, MS, RDN, CLT, “What I find is that people who often rely on processed foods, specifically frozen entrees, chips, and breads, have a tremendous amount of sodium in their diet compared to the recommended 2,300 mg per day, or 1,500 mg ideally for most adults.” “When excessive amounts are consumed on a regular basis coupled with inactivity and poor lifestyle choices, clients become at higher risk for cardiovascular disease, hypertension” Shaw tells me. So avoid these foods in favor of fresh, whole, lower-sodium foods to ensure that your sodium consumption is more level.

Eating too much salt can sap your fluid levels. Liz Blom, RD, tells me, “That Friday night pizza, you know, the meat lovers with extra olives? It’s loaded with salt, and chances are, regardless of what you wash it down with, it is going to leave you dehydrated. Not only will you wake with an extreme thirst the next morning, you will possibly experience a slight headache or stomach upset.” This is not unlike how it feels waking up after a night of drinking alcoholic beverages. But you don’t have to consume any alcohol to feel like you went on a beer bender. Blom continues, “Alcohol or not, processed meat, salty cheese, and olives can break the bank when it comes to daily salt limits, leaving you feeling bloated, lethargic, and dry-mouthed. In my experience, there is such a thing as a food hangover.” To avoid the day-after blues, consider retooling your pizza toppings, or avoid these foods all together.

Have you ever had a ring fit one day and not the next?” asks Blom. If so, chances are you’re feeling the effects of too much sodium in your body. “Excess salt can leave us feeling bloated and swollen. Too much salt throws off the balance of fluid in the body,” she says. “There is a medical term for this called edema, the swelling of extra fluid in your body’s tissues. This extra fluid is also likely to show up on the scale.” So not only will you be bloated — you’ll also weigh more than usual, which can be a downer for most of us. And this excess fluid is a sign of, you guessed it: eating too many salty foods.
Rosanne Rust, MS, RDN, LDN, confirms to me, “Water retention can be an indication that you are consuming too much salt. You may experience puffy fingers or eyes and may find that you are a few pounds heavier due to water retention. You may also be extra thirsty when you’ve consumed a high salt meal or too much sodium.” So it’s clear: salt = bloat.

Your palate has changed

Have you ever found yourself at dinner hogging the salt shaker? And are you the only one at the table who is using it when everyone else doesn’t need it? You likely, then, have a diet high in salt that has altered the way you taste foods. According to Rust, “Our palates can get used to a high salt diet, but can also adjust to a low salt diet. Once you cut back on salt and processed food, you can retrain your palate, and you’ll generally feel more ‘sensitive’ to higher sodium foods when you eat them.”
While it might be difficult in the beginning as food may taste bland, it’s the right move for your health to ditch the salt shaker and all those other salty foods. Plus, there are all kinds of salt alternatives out there that will pack your food with flavor without the unhealthy side effects.

Your stomach is irritated

A number of things can cause a stomach ache: you ate too much, you have a stomach bug, etc. But in some cases, salt consumption could also be a factor. Diets high in salt can cause stomach problems, some of them severe. A high salt diet may affect H. pylori in the stomach, increasing the risk for gastritis or stomach ulcer. These stomach conditions can be very painful, causing a host of problems, including gnawing or burning pain, nausea, and vomiting. If you suspect that your sodium rich diet is causing you gastric distress, cut the salt and get in touch with your doctor or medical professional.

You have high blood pressure

75 million American adults have high blood pressure, roughly one third of the adult population. And a high-sodium diet is one of the risk factors, so it’s important to watch your salt intake. “If you have known high blood pressure (or hypertension), you should limit your sodium intake to about 2,300 milligrams a day. Do this by cutting back on processed/packaged foods, reading food labels for sodium per serving, looking for ‘low salt’ or ‘low sodium’ on canned food labels, and eating out less frequently. Both upscale restaurants and fast food or quick service restaurants serve meals much higher in salt and sodium than what you may prepare at home.
Ignoring high blood pressure and other telltale symptoms can lead to heart disease. And eating a diet high in salt can certainly be a major culprit in contributing to dangerous events such as cardiac arrest and stroke. It’s important to seek medical attention as soon as you develop high blood pressure and hypertension.

You have a kidney stone

Passing a kidney stone can be a severely painful experience that no one should have to endure. However, one in 12 women will have a kidney stone at least once in her life with a 50/50 chance of recurrence. While there is no single, definite cause of kidney stones, there are risk factors, including family history, dehydration, and a high-sodium diet. Such a diet increases increases the amount of calcium that your kidneys have to process, which in turn can put you at a higher risk for developing kidney stones. You can prevent kidney stones by drinking water all day, watching your sodium intake, and listening to your doctor’s orders.

Salt is an essential seasoning in cuisine around the world, and food without it can lack flavor and punch. But clearly, overdoing it can wreak havoc on your body, so it’s essential to practice mindful consumption. When cooking, salt your food sparingly and taste it often — you may not need as much as the recipe calls for. Make sure to read nutrition labels, track your daily sodium intake, avoid food with too much salt added, and ditch the salt shaker on your table. Instead, use fresh herbs to add a depth of flavor to your food. Get to know your spice cabinet, using dried spices and powders instead of condiments like soy sauce and ketchup. You will be surprised how much your eating experience can be enhanced with work, time, and patience.