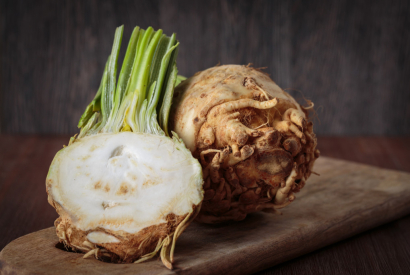 Celeriac, celery turnip or celery knob is a plant from the Apiaceae family. Unlike its cousin ordinary or branched celery, formerly used as a medicinal plant and sometimes as an aphrodisiac, celeriac is grown only for eating, its ball-shaped root reaching an average weight of 1 kg. Celeriac is a winter vegetable much appreciated to vary menus in a season less rich in fruits and vegetables.

How to choose and store celeriac ?

Feel the celery root and choose a firm, pale and heavy ball. Leave aside any spotted or yellowed vegetables that have been picked for too long. Unless you are going to eat it the same day, avoid buying those that have been cut into two because celeriac oxidises rapidly.

How to cook celeriac ?

Cooked, celeriac is traditionally made into soup, a purée prepared with milk and butter or why not plant-based drinks such as soy or almond milk, or even crushed in olive oil. It can also be stir-fried, baked, cooked au gratin or as a shepherd's pie. The refined flavour of celeriac makes it the perfect vegetable to accompany white and red meat. It is also ideal for vegetarian dishes! The flavour of celeriac can be combined with many other vegetables such as carrots, chestnuts, parsnip, sweet potato, potato. And it works well with sweeter flavours such as apple, pear, quince, dried fruit or with spices: vanilla, cinnamon, etc.

Raw celeriac is of course best known for that great French classic: celery remoulade. This traditional starter although delicious is too often drowned in mayonnaise. So why not opt for a home-made version? That way you have full control over the quality and the quantity of the ingredients used in its preparation (a home-made mayonnaise without additives or preservatives). You can also opt for a celeriac salad and adapt the remoulade sauce recipe by replacing the mayonnaise with yoghurt mixed with mustard or by marinating a mixture of grated celeriac and carrots for 2 hours in the refrigerator with lemon or rice vinegar, a touch of mustard, olive oil, a drop of almond cream or liquid soy and capers. A quick visit to a few kitchen blogs will be certain to turn up a recipe that suits you.

Celeriac can cause food allergies and is one of the allergens listed on processed food product labels. Cases of cross-allergies have been reported for those allergic to birch and wormwood/artemisia pollen.