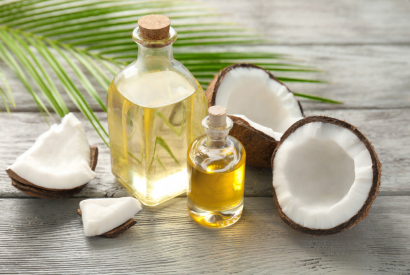 Coconut oil is being used more and more by French businesses. It is extracted from coconut meat and its solid texture is due to an ambiant temperature that is too low for the oil to remain liquid. It nonetheless melts quickly with a little heat. Coconut oil had long be considered to be bad for health, due in particular to the large number of saturated fatty fats that it contains but this oil, which is used in cooking and in cosmetics, has health benefits that it would be a pity to neglect.

The scientific community has been surprised by the fact that certain Pacific populations, whose traditional diet is principally composed of coconut, have so few illnesses (1). They discovered that regularly consuming coconut oil helps to actively fight against the proliferation of "bad" cholesterol in the body, and thereby limit the development of a certain number of cardiovascular diseases (2). Coconut oil is thought to have a in the short term. The body reacts naturally to the oil's fatty acids which accelerates the feeling of feeling full (3). Paradoxially these fatty acids increase the metabolism of fats and the body's consumption of calories. In short, consuming coconut oil enables you to eat the same amount while burning more calories (4). This mechanism also has a relative anti-cancer effect as it prevent cancerous cells from absorbing the glucose that they need in order to multiply (5). The lauric acid present in coconut oil boosts the immune system, which is then better able to fight certain types of harmful bacteria such as staphylococcus aureus (6) or candida albicans (7).

In particular, coconut oil has been hailed in several studies as a key in the fight against the symptoms of Alzheimer's. It contains very specific molecules that actively stimulate neural connections: medium chain triglycerides and ketones indispensable to cerebral health. Experts generally recommend ketonic diets to prevent all types of neurodegenerative illnesses (8), such as Alzheimer's and Parkinson's, but trials of coconut oil against Alzheimer's have been the most compelling, with drastic improvements shown in the short-term memory of the patients treated, at all stages of development of the illness. (9)

How to cook with coconut oil

Coconut oil therefore has an important place in your kitchen! It is an excellent substitute for all types of fat and also has the advantage of being able to be cooked at high temperature or fried without losing its benecial effects. It has a very light taste with very little sugar. You can therefore use it to your taste in all recipes, both sweet and savoury. Organically produced extra-virgin coconut oil is often of better quality so consider using it if possible.