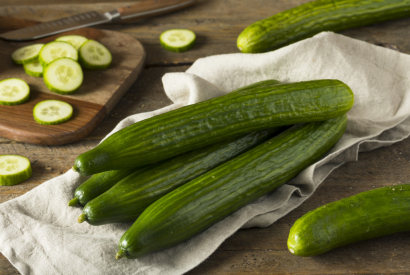 There's nothing like a refreshing, thirst-quenching cucumber in the summer. Filled with water and nutritionally-rich this vegetable belongs to the vast cucurbitaceous family, along with squashes, melons, zucchini, squash, pumpkins and watermelons, amongst others. Cucumbers originally came from India and were introduced into France back in the 9th century: Charlemagne was one of its first great fans! Today they are available in the shops through the spring and summer, from April to October.

The cucumber may be 96% water, but is also very rich in Vitamins C and K, known for their value as antioxidants. Regularly consuming phenol flavonoids (1) such as those found in the humble cucumber is an easy way to limit the proliferation of free radicals (2), so harmful for the body (3). This type of anti-inflammatory antioxidant also encourages the elimination of "bad" cholesterol from the blood and helps combat those diseases involved in cell ageing (4). The cucumber also contains a high concentration of lignans (5), molecules that the scientific community considers to have considerable beneficial effects against certain cancers, such as breast and prostrate cancer (6). Finally, like most other fruits and vegetables, the cucumber is rich in soluble fibres that protect not only the digestive but also for your cardiovascular systems (7).

How to choose and taste cucumbers

Whenever possible, choose organic cucumber. Pesticides tend to accumulate in the skin of the cucumber, which also concentrates almost all its nutrients. So never hesitate to peel it only partially before enjoying it raw.

Cucumber recipes offer an amazing range of possibilities: over to you and your creativity! The cucumber is the ideal summer vegetable to accompany drinks and appetizers. Serve it cut into matchsticks with just the lightest sprinkling of salt and a yoghurt, mint and parsley sauce or dip. Tzatziki is a Greek speciality, perfect for spreading on bread or toast. Cucumber will make any summer salad even more refreshing; toss it with feta, avocado, spring onions and tomatoes. Why not dare a more original touch and add a few strawberries? Iced cucumber and mint soup also offers a good alternative for a light refreshing meal when the summer heat hits. Flavour your drinks with slices of cucumber: cucumber and lemon water is a great elixir of youth, thirst-quenching, low in calories and totally delicious. You can also use thin strips of cucumber in carpaccio recipes, for example with salmon and raw zucchini.