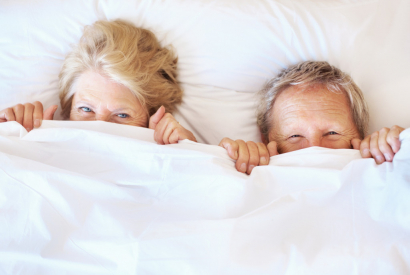 Most of us have heard that we need less sleep as we age. So when older people spend hours awake in the middle of night or wake before the sun comes up, they tend to accept it as a normal part of aging. But do you actually need less sleep as you get older ?
No, says Professor David Hillman, chair of the Sleep Health Foundation, older adults need the same amount of sleep as young people. "Adult sleep requirements are pretty stable from about the age of 20 on. Sleep does change as you get older, but the sleep requirements remain pretty constant once you've established that in your early 20s," he says.

Hillman says it is remarkable how many older people endure feeling sleepy without seeking help, because they think it is a natural part of ageing. But in many cases there is a reason for this poor sleep, and once a poor sleep is identified and treated, older adults can feel years younger. "If people notice a change in their sleep requirements as they get older, such as spending longer in bed for less benefit, and waking up unrefreshed despite getting the same amount of sleep that used to refresh them, then that implies there's something wrong with sleep itself," he says.

What controls your sleep ?

Your "body clock", which is actually the circadian centres in your brain, dictates your propensity to sleepiness and wakefulness across day and night. These centres are generally influenced by light and darkness, but can also be affected by other aspects of your daily routine, such when you eat and when you exercise. While some people have quite robust sleep patterns and still get the rest they need despite changing their daily routines, many people's body clocks rely on fairly constant habits.

Your body clock also controls the production of a hormone called melatonin, which promotes sleep. As you grow older you produce less of this hormone, which may make it more difficult for you to sleep. Older adults are also more likely to experience advanced sleep phase syndrome, which means you get sleepier earlier in the evening so while you may still be sleeping for eight hours, you might find yourself awake before the birds. Also, while your body is programmed to sleep at night, some of us find ourselves feeling sleepy in the afternoon. Given that older adults are less likely to be at work, they sometimes have an afternoon nap. But napping in the afternoon, especially later in the afternoon, will affect how well you sleep at night.

There are also specific health issues related to aging that can have a significant impact on sleep, especially your ability to fall asleep, these include:

If any of these factors are affecting your sleep then it's important to talk to your doctor about them, as treating an underlying condition that is causing poor sleep often leads to better sleep. And if you don't have an underlying issue, but still have constant difficulty dropping off to sleep, or going back to sleep after waking during the night - then you may have insomnia. Insomnia is not necessarily linked to aging, so it's best to speak with your doctor about your options for treating insomnia.

Tips on getting enough sleep