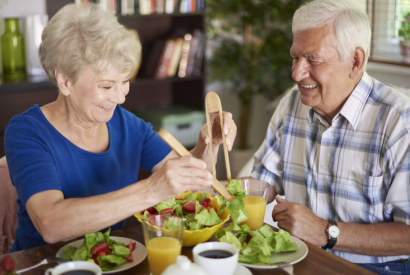 It doesn't matter what age we are, we all need a healthy, balanced diet to stay fit and well. But did you know that as we become older, our dietary needs change? And yet, for a range of reasons, it becomes harder to ensure we get enough of the nutrients we need, such as calcium, zinc, and folate. This can cause problems ranging from a higher rate of infections to an increased risk of falls – and it can even mean you have a greater chance of dying at a younger age. Experts say the problem is only going to get bigger as elderly population grows. It seems that the more people get older, the more malnourished they are.

There are many reasons elderly people become malnourished, but people who are sick or live alone are more at risk. Some illnesses such as cancer can reduce appetite, while many medications can increase our requirements for vital nutrients such as calcium or iron. Older people tend to use lots of prescribed medications and often they can interact with each other which can cause problems with nutrient absorption, digestion and appetite.
Depression and loneliness especially after a period of bereavement, can also impact quite severely on a person's willingness to eat. Aside from health problems, for many older people, social and financial issues can also be a reason they aren't eating the right foods. Often older people don't have as much money to spend on food as they did when they were working. The cost of food is increasing all the time, so that could be another reason that older people have a limited diet and may rely on foods that are cheaper. Also, an older person may not be mobile so can't get to the shops.

Unfortunately, recognizing malnutrition in yourself or a loved one isn't as easy as it may seem. Rapid weight loss over the past three to six months is a good indicator that a person may be malnourished but even people who are overweight can be at risk. There are often no signs or symptoms; you can be a perfectly healthy weight but still be malnourished. Some people can look overweight and be malnourished, especially if they don't do much activity or have recently been unwell. Malnourishment can lead to a range of health issues including:

Few researchers have examined the issue of malnutrition risk among older people living independently. An estimated 10 per cent are thought to be malnourished at a given time. More attention has been paid to the problem of inadequate dietary intake in older people in residential aged care and also in hospital. In many hospitals, malnutrition is a "skeleton in the closet". It is often not considered a priority by medical staff due to heavy workloads and a lack of clarity about whose responsibility it is to ensure patients are eating to meet their needs. Meanwhile, a study published in 2009 found that up to 70 % of older people in residential aged care, such as nursing homes, may be malnourished. The reason people under care appear to be at higher risk of malnutrition than those who live in the community could be because these people are more likely to have illnesses, such as dementia which means they simply forget to eat.

If you think you - or someone close to you - might be malnourished, it's worth raising the issue with your GP who may decide a referral to a dietitian would be helpful. However, some simple changes can make a big difference to the quality of your diet, and they don't have to cost a lot of money. There are also valuable services available that can help provide nutritious meals.

Complete your diet with customized supplementation

We have selected categories of dietary supplements for their essential nutrient intakes. Far from being exhaustive, this list gives clues about the type of supplementation to focus!