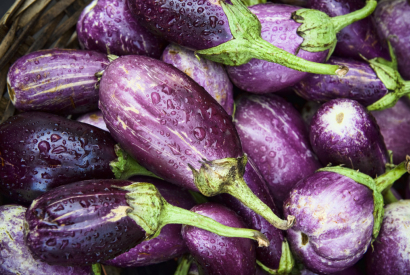 Also named eggplant, the aubergine is incongruous on market garden stalls because of its majestic dark purple colour and is an elegant vegetable full of nutrients. While some old European beliefs have long considered it (wrongly!) as a highly toxic garden ornament, its taste has been very popular in cuisines from all around the world for centuries. In parts of India, its flesh, with its texture similar to meat, is used to enhance a mainly vegetarian diet. The aubergine also gives its colours to many Mediterranean and Middle Eastern dishes, where it is affectionately nicknamed the "caviar of the poor". In France, the best time to enjoy this sun-kissed vegetable, from the same Solanaceae family group as tomatoes and peppers, is therefore in the summer and the beginning of autumn. The eggplant season continues until the beginning of October.

The eggplant's peel works wonders for your cardiovascular health! The majority of its properties are in fact contained in its skin. Nasunin, the pigment that gives it its purple colour, is indeed considered to be a powerful antioxidant (1) and is known for its ability to protect brain health from oxidative stress (2) by regulating the lipid activity in the brain cells. These properties are therefore proportional to the shade of your aubergine's skin: the darker the vegetable you choose, the more nasunin it will contain!

As a light vegetable (approximately 35 kcal per portion) (3), eggplant also helps to fight against obesity and chronic diseases, such as type 2 diabetes. It is in fact rich in phenolic acids (4), a type of antioxidant that causes a systematic reduction in the concentration of "bad" cholesterol in the blood (5). Some pesticides may alter these properties, so try to use vegetables from certified organic farming wherever possible.

How to choose, store and cook eggplants?

Eggplant is essential for preparing a good ratatouille, but there are many alternatives to sublimate its taste. An eggplant which is ready to be prepared will have shiny skin without any marks which bounces to the touch. Eat it as soon as possible after buying it, as it withers quickly and does not keep well in the fridge. For a quick but effective recipe, first brush your eggplants with olive oil, season them and then roast them in the oven or barbecue them with some herbs and parmesan cheese. Its flavour is also given place of honour in moussaka, a typical Balkan dish. You can make a lighter and practical version by grilling your aubergines in the oven instead of frying them like in the traditional recipe and by replacing the lamb with a less greasy mince. Enjoy!