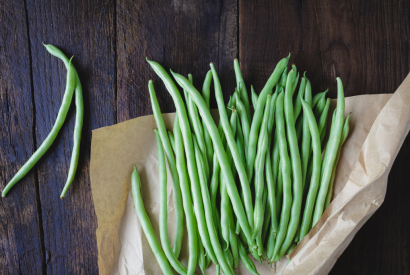 Nothing better than a good green bean salad on a summer evening! The common bean, of the Phaseolus vulgaris species, first appeared in Europe in the 18th century, imported from South America. Little by little, in France, the producers started to harvest them earlier and earlier in the season to prevent them from becoming too fibrous: the green bean, also known as the French bean in the United States, was born! This brand new variety earned its title of greatness thanks to its thin shape: consumed in regal courts in Europe, certain sorts of green beans, known as "filet" are still used in top dishes served in the highest-class restaurants. France is now one of the leading producers of this legume, bursting with essential vitamins and minerals.

Light and tasty, green beans are harvested from June to October. Low calorie (approximately 20 kcal per portion), they belong to the legume family, which means that even when fresh, they contain more proteins than most other pulses. Filled with fibres which make them easier to digest, they stimulate transit and protect the intestinal flora. Specialists recognise their high silicon (1) content, a mineral that is less well known than magnesium or calcium, which these succulent beans also contain, but is just as essential for good bone health.

Don't let their colour fool you: green beans have a composition similar to that of carrots! (2) This includes beta-carotene, an anti-inflammatory agent that, among other things, preserves vision and limits the risk of age-related macular degeneration (3). Combined with Vitamin C and Vitamin B9, which are also fairly concentrated in these miracle legumes, beta-carotene has an anti-oxidant effect that enables skin tissue and capillaries to be regenerated, for beautiful skin and quicker scar healing (4).

How to cook and taste green beans

Remember them throughout the year: green beans are obviously better when fresh and in season, but their frozen version is a close match. Their properties are preserved for 3 to 6 months after freezing (5). However, be aware: it has been proven that in tinned form, they lose some of their essential vitamins (6). You should therefore choose the frozen version over the tinned version.
Fresh, to make the most of their crunchy aspect and all their nutritional benefits, you can eat them very slightly blanched. They are also delicious when melted and fried in more gourmet recipes, sautéed with garlic and mushrooms, for example. Green beans are also delicious in salads. Their flavour mixes strangely well with honey, garnished with a few nuts and a bit of goat's cheese, for an original savoury/sweet recipe. The most "classic" green beans salad sees them accompanied by tomatoes, corn and a little vinaigrette, but you can also eat them coated with nothing but a drizzle of olive oil, a touch of lemon juice and a few pine nuts.