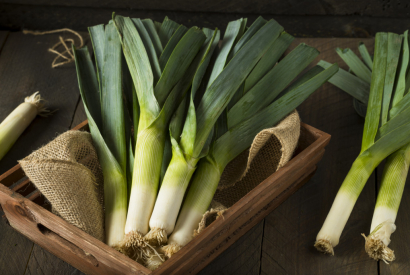 The leek belongs to the Allium family (alliaceae), along with garlic and onions. If the scientific community tends to be more interested in the nutritional virtues of the last two, it is generally considered that the benefits offered by the leek are just as exceptional. The leek was introduced to Europe back in ancient times. We know, for example, that the despot Nero ate leeks every day, to preserve the quality of his voice. The leek is easy to grow in large quantities and is very resistant to long cold winters. Which explains why it is grown throughout Europe, forming part of the diet of even the most modest households since the Middle Ages. Today, it is amongst the top ten most frequently eaten vegetables in France, with a range of different varieties being grown all year long. Rediscover the amazing virtues of the humble leek!

The sulfurated derivatives of the leek constitute excellent antioxidants that protect cells from the ageing process. These are mainly concentrated in the bulb and white part of the vegetable (1). On the other hand, the green leaves contain the highest levels of kaempferol, a powerful flavonoid that acts to protect against the potential development of certain cancers (2). The leaves are also rich in insoluble fiber, excellent for the digestive system and the maintenance of a healthy population of gut bacteria. So don’t hesitate to cook all parts of your leeks, if you digest them well! In addition, the leek contains saponin (3), a molecule known for its beneficial potential for cardiovascular health: working together with the vegetable's other flavonoid acids, it helps to stabilize blood cholesterol levels (4). Finally, the vitamin B9 (also known as folate or folic acid) found in leeks is particularly recommended for pregnant women as it encourages the production of the cells essential to a healthy pregnancy and the renewal of blood cells.v

How to cook leeks

All parts of the leek can be eaten, so we strongly recommend that, whenever possible, you buy vegetables grown by organic farming methods, in order to limit your consumption of pesticides that can be dangerous to health. In terms of recipes, the leek is remarkably easy to use in the kitchen and quick to prepare and cook. It can be eaten raw (particularly young leeks with a diameter of approximately 50 mm) but is easier to digest when lightly cooked. It retains its nutritional properties best when steamed. To make a change from classic recipes, such as the ever-popular leeks in vinaigrette or vichyssoise soup made with leeks and potatoes, try a more contemporary touch by replacing the potatoes with rice flakes or non-toasted gluten-free quinoa, or even by custard marrows. Indulge your inner foodie with a delicious leek fondue, quick and simple to prepare. Simply "melt" the vegetables gently in a frying pan with a very small amount of fat. You can also add a touch of low-fat cream (vegetarian or not) and a few spices (turmeric, ginger, cinnamon or nutmeg): for a seriously tasty result. For an original version of the classic leek quiche, cook as for leek fondue and use to fill a pastry case after seasoning with curry and a touch of honey.