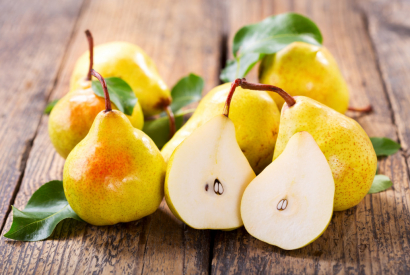 Pears are a member of the rose family of plants (Rosaceae), which contains a long list of fruits including apples, apricots, cherries, chokeberry, crabapples, loquats, peaches, plums, quinces, etc. The many different varieties of pears commonly found in groceries and markets all belong to the same category known as European Pear (Pyrus communis). These pears typically have a rounded body that tapers into a neck of various lengths.

There is some debate about the exact origins of the European pear, but many experts believe that European pears (Pyrus communis) and Asian pears (both Pyrus pyrifolia and Pyrus ussuriensis) evolved separately and during the same approximate time in history (roughly 1000 BC). Certain species of pear are also native to parts of Africa.

Pears are found in a variety of colors, including many different shades of green, red, yellow/gold, and brown. Many varieties fail to change color as they ripen, making it more difficult to determine ripeness. Today, pears are produced around the world. More than 1,000 varieties of pears are listed but only a dozen varieties are grown on a large scale : Guyot, Williams, Alexandrine, Beurre Hardy, Comice, Louise Bonne, Passe-crassane, Conference, etc.

How to store and taste pears

Since pears are very perishable once they are ripe, the pears you find at the market will generally be unripe and will require a few days of maturing. Look for pears that are firm, but not too hard. Avoid pears that are punctured or have dark soft spots.
To conserve ripened pears, you can place them in the refrigerator where they will remain fresh for a few days. If you want to hasten the ripening process, place them in a paper bag, turning them occasionally, and keep them at room temperature.
Pears are delicious in applesauces, pies, desserts, ice creams, charlottes, stewed fruit, etc. They can also be combined with "salted" dishes such as winter salads, tagines or with cheese.