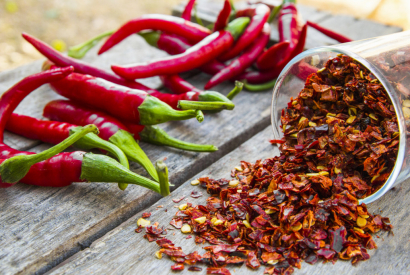 Pepper is a sunned vegetable! In effect, it belongs to the Solanaceae plant family which includes most fruits and vegetables used in Mediterranean cuisine such as tomatoes and eggplant. Pepper is delicious and full of aroma in summer. It has a wide variety of colours, though colour differences do not determine differences in variety as one would think, but rather indicate the level of maturity of this Capsicum Annuum vegetable specie at the time of harvest. The nutrients you get from pepper may therefore vary with colour! (1)

Green pepper harvested before maturity has a highflavonoids,concentration; up to eight times higher than red pepper. This type of antioxydant enables the strengthening of the immune system and the fight against chronic diseases. Flavonoid consumption may therefore prevent some types of cancer or even cardiovascular diseases (2). Paradoxically, the more mature and yellow and eventually red the pepper at the time of harvest, the higher its Vitamin C concentration. As a result, it is estimated that a serve of ripe red pepper may have twice as much of this vitamin as orange does on average; that is about 157% of the daily quantity recommended by the WHO (3). Vitamin C also called ascorbic acid is regarded as an excellent antioxidant and anti-inflammatory which strengthens the immune system and helps in the prevention of some diseases caused by cell aging.

At every stage of its maturity, pepper is a great source of Vitamin A, which is brought about by carotenoid that is responsible for the bright colour of this vegetable (4). Vitamin A is the cell regenerating vitamin. As such, increased pepper consumption may improve the quality of your epidermis and bones in the long run. Just like Vitamin C, Vitamin A can be considered an antioxidant which improves sight and reduces risk of chronic conditions like macular degeneration which is age related (5).

How to select and store peppers ?

To select your pepper, you have to follow the same rules irrespective of its stage of maturity: If the peel is solid, the colour bright, the fruit heavy enough and apparently full; the pepper is ready for consumption. Enjoy it! It has been proven that its nutritional value is at its peak at that moment. If not, wait until it is mature! Pepper in particular can get ripe even after harvest or even after purchase. Store it out of the refrigerator to let it get ripe quickly! Most of its vital nutrients are found on the peel, which however has most pesticide remnants. For that reason, pepper from organic farming is preferable if available.

How to Cook Peppers ?

Pepper is the Ideal companion for your summer barbecues. The tart vegetable is a perfect match for the flavour of grilled meat. For vegetarian variety, you may mix it with eggplant. You can also try Basque Chicken recipe by combining pepper aroma with those of white wine and shallots for an economic and healthy meal. For an original variant, serve Basque chicken in the form of fajitas! Finally, pepper can bring joy to your taste buds in cold soups such as the famous gazpacho recipe. Before you have a taste of it, note that it loses some of its nutritional value if cooked in very high temperature. Avoid cooking it too much if the recipe allows you to! Enjoy your meal!