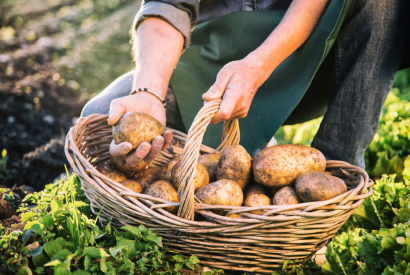 In the U.S., people eat an average of 126 pounds of potatoes per person each year (1) and in France, per capita consumption of potatoes is 65 kg (143 pounds): 40 kg in fresh form and 25 kg in processed form (11). However, potatoes don’t count as a vegetable on Harvard’s Healthy Eating Plate because they are high in the type of carbohydrate that the body digests rapidly, causing blood sugar and insulin to surge and then dip (in scientific terms, they have a high glycemic load). For example, a cup of potatoes has a similar effect on blood sugar as a can of cola or a handful of jelly beans (2,3).  This roller-coaster-like effect on blood sugar and insulin can result in people feeling hungry again soon after eating, which may then lead to overeating (4). Over the long term, diets high in potatoes and similarly rapidly-digested, high carbohydrate foods can contribute to obesity, diabetes, and heart disease (5-10).

Potatoes seem to be a particular culprit for weight gain and diabetes. A 2011 study by Mozaffarian et al. that tracked the diet and lifestyle habits of 120,000 men and women for up to 20 years looked at how small food-choice changes contributed to weight gain over time. People who increased their consumption of French fries and baked or mashed potatoes gained more weight over time - an extra 3.4 and 1.3 pounds every four years, respectively (8). People who decreased their intake of these foods gained less weight, as did people who increased their intake of other vegetables. A similar long-term study found that high potato and French fry intakes were linked to a greater risk of diabetes in women, and that replacing potatoes with whole grains could lower diabetes risk (10).

Potatoes do contain important nutrients - vitamin C, potassium, and vitamin B6, to name a few. But the potato is not the only source of these nutrients, nor is it the best: For example broccoli has nearly nine times as much vitamin C as a potato and White beans have about double the potassium.

What to eat instead of potatoes ?