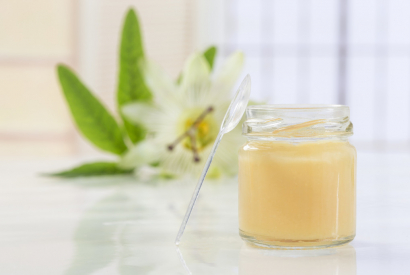 In the 4th century BC, the Greek philosopher Aristotle spoke of this "sort of whitish jelly that looks similar to gruel" (1). It was one of the ingredients of Ambrosia, a drink said to confer immortality on the gods in ancient times.

The origin of Royal Jelly

Above all royal jelly is a substance that is essential for a hive to survive. A colony of bees needs it to feed the larvae who literally bathe in it, and to feed the queen. When the hypo pharyngeal and mandibular glands of the young bee have developed, it produces royal jelly. Royal Jelly is therefore a blend of the secretions from these two glands, together with the pollen and nectar collected from flowers by the bees. A hive dedicated to producing royal jelly can make 300 g to 500 g per year.

What does Royal Jelly contain ?

The composition of royal jelly is in itself an exceptional natural concentrate:

Overall, the lipids in royal jelly are, for the majority, made up of fatty acids (aliphatics). In addition to the fatty acids, these lipids contain minor quantities of sterols. These are interesting for the functions that include acting as potential inhibitors for cancer, modulators for the immune system, alternative therapies for the menopause, for having an anti-age effect on the skin, inducing neurogenesis, and many others. Taken together, the data from research indicate that the protective properties of royal jelly in terms of health can, in part at least, be attributed to the actions of the lipids contained in royal jelly. All of these elements (more than a hundred different compounds) fully justify the outstanding reputation of royal jelly!

Why should you take Royal Jelly ?

Royal Jelly can be taken as a food supplement both preventive or supportive, as a short-term course or all year long to boost levels of vitamins, trace elements and anti-oxidants. After a few days of treatment, the effects on vitality can be truly spectacular!