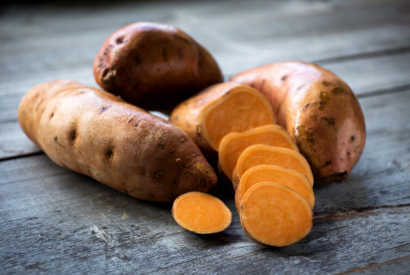 The sweet potato is a plant from the Convolvulaceae family of which we eat the tubers and the leaves. Originally from South America, like the ordinary potato, the sweet potato owes its name to its sweet taste. It is known as camote in certain countries in Central and South America and in the Philippines.-The sweet potato produces elongated or sometimes rounded tubers, with a thin skin that makes them difficult to peel. Depending on the variety, the colour of the skin may be beige, brown, yellow, orange, dark pink, purple or violet. The flesh of the tuber also varies within the same palette of colours. White or yellow-fleshed sweet potatoes are less sweet and contain less water than sweet potatoes with a more coloured flesh.

From a nutritional point of view, the varieties with very colourful flesh are preferable as their colour indicates the presence of larger amounts of antioxidants such as anthocyanins (specifically the violet or purple-fleshed sweet potatoes) which belong to the flavonoid family, known for their anti-cancer, anti-inflammatory (1) (2) and antioxidant (3) properties, and beta carotene the best-known carotenoid, which allows the body to metabolize vitamin A as needed. The sweet potato also provides vitamins B6, B2, B5, vitamin C, copper and manganese.

In some countries, the leaves of sweet potato are also eaten. Prepared like spinach or manioc leaves, they are rich in protein, beta carotene, calcium, phosphorus, iron and vitamin C. In many developing countries, sweet potatoes are grown by every family, for their own consumption. It is a nourishing, nutrient-rich food that is a dietary staple, like many other tubers (manioc, yam).

Today the sweet potato is cultivated and consumed throughout the world (Africa, North and South America, Asia) and even in Europe where it is still considered a little 'exotic' even if more and more of us eat it. In wealthier countries where food security is no longer a problem, there is another good reason to eat sweet potato: its glycemic index. Indeed, the sweet potato has a particularly low glycemic index within its category. A GI of 46 compared to the boiled potato (peeled) with 78 and quick-cooking rice with 87!

How to cook the sweet potatoes ?

It has won you over but you're not sure how to cook it? Here are a few simple and tasty ideas. Sweet potatoes can be steamed, boiled (preferably cooked with the skin on and peeled after cooking), served as mashed potatoes, in soup, curry, stews or even as chips (if you really have to!). You can also bake them (whole and unpeeled) or cut them into chunks or cubes to make sweet potato chips in the oven). Sweet potatoes can also accompany a sauerkraut (to replace ordinary potatoes) or even as a gratin with desalted cod. In a word, cook sweet potatoes just as you would cook the ordinary potato and simply adjusting the seasoning. The flavour of the sweet potato is particularly good with cinnamon, coconut milk, coconut oil, turmeric, curry, Szechuan pepper, nutmeg, four spices, etc. With so many recipes it's time to get busy in the kitchen!