Why ginger is good for you 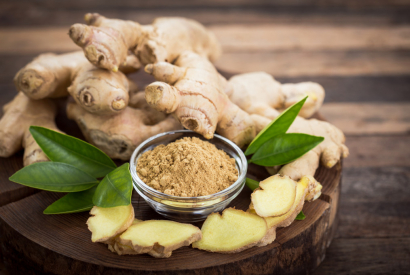 The spice ginger is the underground rhizome of the ginger plant, known botanically as Zingiber officinale. The plant's botanical name is thought to be derived from its Sanskrit name Singabera which means “horn shaped”. The flesh of the ginger rhizome can be yellow, white or red in color, depending upon the variety. It is covered with a brownish skin that may either be thick or thin, depending upon whether the plant was harvested when it was mature or young. The ginger plant has the particularity to adapt to different latitudes: Asia, Africa, Latin America, it is grown almost everywhere on the planet. Its properties are well-known of traditional Chinese medicine and Indian one (Ayurveda). More recently, ginger is used in Western Europe and North America in aromatherapy and nutritherapy.

Ginger, an ally of the gastrointestinal sphere

Historically, ginger has a long tradition of being very effective in alleviating symptoms of gastrointestinal distress. In herbal medicine, ginger is used to help the elimination of intestinal gas and to sooth intestinal spasms. Ginger is used in particular to stimulate digestion. It contains a resin that helps digestion while its highly fragrant essential oil protects the stomach. Finally, it stimulates the secretion of saliva and promotes bowel movements.

Ginger's anti-vomiting action has been shown to be very useful in reducing the nausea and vomiting of pregnancy, even the most severe form, called hyperemesis gravidum. In a double-blind trial, ginger root achieved a significant reduction in both the severity of nausea and number of attacks of vomiting in 19 of 27 women in early pregnancy. Unlike antivomiting drugs, which can cause severe birth defects, ginger is highly reliable. A review of six double-blind, randomized controlled trials with a total of 675 participants, published in the April 2005 issue of the journal Obstetrics and Gynecology, has confirmed that ginger is effective in relieving the severity of nausea and vomiting during pregnancy. The review also confirmed the absence of significant side effects or adverse effects on pregnancy outcomes.

The anti-inflammatory properties of ginger

Ginger contains very potent anti-inflammatory compounds called gingerols. These substances are believed to explain why people with osteoarthritis or rheumatoid arthritis experience reductions in their pain levels and improvements in their mobility when they consume ginger regularly. In two clinical studies involving patients who responded to conventional drugs and those who didn't, physicians found that 75% of arthritis patients and 100% of patients with muscular discomfort experienced relief of pain and/or swelling.

A study published in a recent issue of Osteoarthritis Cartilage suggests that regularly spicing up your meals with fresh ginger may help. In this twelve-month study, 29 patients with painful arthritis in the knee (6 men and 23 women ranging in age from 42-85 years) participated in a placebo-controlled, double-blind, crossover study. Patients switched from placebo to ginger or visa versa after 3 months. By the end of the first six-month period, those given ginger were experiencing significantly less pain on movement than those given placebo. Pain on movement decreased from 46%. In the final phase of the study when all patients were getting ginger, pain remained low in those already taking ginger in phase 1, and decreased in the group that had been on placebo.

Modern scientific research has revealed that ginger possesses antioxidant properties including the ability to inhibit the formation of inflammatory compounds. A study published in the November 2003 issue of Life Sciences suggests that at least one reason for ginger's beneficial effects is the free radical protection afforded by one of its active phenolic constituents, 6-gingerol. In this in vitro study, 6-gingerol was shown to significantly inhibit the production of nitric oxide, a highly reactive nitrogen molecule that quickly forms a very damaging free radical called peroxynitrite. Another study appearing in the November 2003 issue of Radiation Research found that in mice, five days treatment with ginger (10 mg per kilogram of body weight) prior to exposure to radiation not only prevented an increase in free radical damage, but also greatly lessened depletion of the animals' stores of glutathione, one of the body's most important internally produced antioxidants.

How to select and use ginger

Traditionally ginger is used as a spice in hot dishes (fried vegetables, curries, stews, spicy soups) or cold (seasoning in salads, desserts: cookies, cakes, fruit salads, homemade applesauce). Ginger can also be prepared as a hot or cold drink, obtained by decoction. Whenever possible, choose fresh ginger over the dried form since it is not only superior in flavor but contains higher levels of gingerols. When purchasing fresh ginger root, make sure it is firm, smooth and free of mold. Peel it before grating unless it comes from organic agriculture. You can then brush and rinse it before use. Raw peeled ginger can be kept in the freezer. You can also freeze in an ice cube tray a very concentrated decoction of ginger.